During the recent winter break, I took a snowboarding trip up to Mammoth Mountain ski Resort to get some pow in with my buddy Matty! We drove from Santa Barbara, CA to Mammoth which took about six hours of watching old kids movies while fading in and out of consciousness in the middle of the Mojave Desert.Once we arrived in the middle of the night at Matty’s condo we quickly fell asleep. 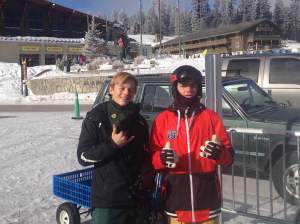 My first day was more of a time to relearn what skill I previously had, since I hadn’t beed snowboarding in two years. It took me a bit, but eventually I was able to do everything I used to be able to do, at the expense of a couple falls. It wasn’t long before Matty was taking me into the glades(trees). We also met up with some other friends who were on the mountain hitting a jump they made. By the time I wanted to try the jump I luckily had some tricks to land it from previous natural jumps and terrain Id been dropping off of in the glades.

The scenery was amazing! Practically everywhere you looked were trees frosted in sparkly snow crystals, giving the felling of being in a truly magical place:0 the days that it was snowing was very unreal! It looked like sparkles falling from the sky, that would melt once they hit your body. If you go to mammoth your self, be prepared to see snow covered bras and other miscellaneous things hanging from the trees along the ski lifts…

At the end of each day, granted a feeling of great accomplishment, along with fatigue, and hunger!, but just to be able to have the amazing thrill of snowboarding makes it all worth it. One of the days it was so cold and windy that the my breath through my face guard cause it to freeze to my face! The feeling of being in such an intense climate while shooting down a snowy hill dodging through trees and other people provides an unexplainable experience. Even Just the feeling of sliding effortlessly is something Ive been awed by every time I go snowboarding, and snowboarding or skiing is truly something everyone should be able to experience at least once in their lives.

Go outside and find something that truly amazes you, wether it is going to the snow or just experiencing something new that gives you a thrill.